I was considered high risk throughout my pregnancy due to a genetic blood clotting disorder.  I had to give myself daily injections of Lovonox through y entire pregnancy to prevent clots.  Because of this, I was told by my doctors that I would be induced if I was late.  Most first time moms are late, but i walked a lot and worked out through out my pregnancy, so I was hopeful that I would not have to be induced.

I was due on March 16 and but there was no sign of baby that day!  I worked until March 17 and then my doctor had me go in to his office on the 17th, a friday and then again on March 20th, a monday.  It was decided on that appointment I would be induced on the 21st.  There was no progress or dilation at that point, but I was told that the Lovonox tend to thin out and age the placenta, so they did not let me go any longer to start the induction process. My age wasnever mentioned, but I am sure that the fact that I was 38 was also a factor.  I was not happy but trusted my doctors knew best.  We went into NYU Langone on the evening of March 21.  We were told to eat a big meal because I may not eat again for a while and have something to give me strength for the birth process so we had pasta and pizza!

They finally started the process of induction early in the morning of the 22nd- it took awhile to go through the admission process, take vitals, and getting set up in a Labor and Delivery room.  The room was huge and comfortable with a couch that turned into a bed for my husband.

The induction process for me was as follows:

-Set up on fetal monitors which showed I had started contractions already, but they were not strong at that point.

-a cervix softening pill was inserted (believe it was called Cervidil)

-a foley balloon catheter was inserted

We then waited 4 hours.  The balloon was painful to me- every time I move or got a contraction, I felt the balloon inside me like a stabbing feeling. The balloon was supposed to fall out on its own when you reach 4cm.

After 4 hours, not much progress was made so pitocin began.  I began to vomit quite a bit at this point.  Everytime I took a sip of water or ginger ale I threw up again.  Not sure if it was the labor, or drugs or both but I got sick at least 10 times throughout the course of the labor.

The doctors came in about 12 hours after the process started and took out the balloon and broke my water.  He said I was 6 cm at that point.  It was very painful when he took out the balloon, so I believe he was mistaken, because the balloon is supposed to just slide out when you reach 4cm.  The added more to the pitocin and I opted for the epidural at this point because of the pain and to try and rest.  The next doctor came in for a new shift and said i was only 4 cm dilated, so we were confused as to what was going on at this point.  The epidural also only worked on half my body, so I felt a lot of pain and nausea.  I labored for about 10 more hours and did not get much further.  Since my water was broken for a while and they kept losing the baby’s heart rate on the monitor, they suggested i get a cesarean section.  I did not want this, so I asked for a few more hours.  They turned up the pitocin more which involved more throwing up.  Finally, I consented to the csection becasue it was getting to be a while since my water had broken and even though the baby wasnt in distress, I didn’t want it to get to that point.

During this process, I had many family members in the waiting room waiting to meet this City Babe!  They all came in and we prayed and took our final gender guesses.

I was wheeled into the operating room and prepped for surgery.  the whole thing was very quick taking less than a half hour.  The scariest part for me was that they had to keep adding more epidural because I had feeling in half my body.  They kept tapping me to see if I still had feeling.    Finally when I was numb they started the c-section.  I didn’t feel anything except some pressure on my stomach when they were pulling the baby  out.  It was surreal.  We finally found out it was a boy!  he was so cute and smushy but I was a bit dazed.  They cleaned him up and did his vitals and then handed him to my husband. We had discussed a few names and when he was held up my husband said he looks like an Oliver, and he is! 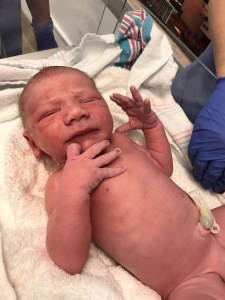 I was still shaky when they finished cleaning me up and moved me to another table and then handed me the baby.  I was nervous I would drop him but it was fine and he was so cute!

My husband went out to tell our family the good news and I had a few minutes to stare at my new baby in awe.